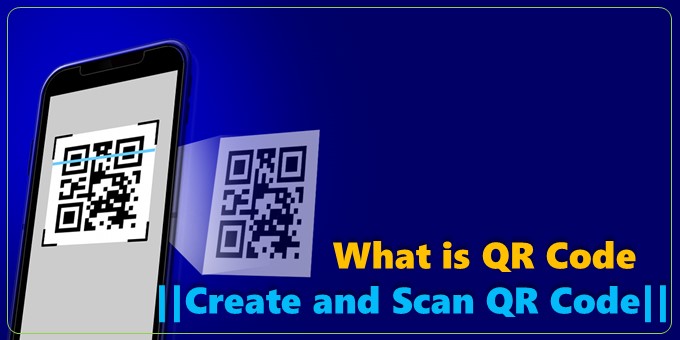 If you are an old user on the Internet, then you must have seen the QR code somewhere. If you are a new user then we are going to give you complete information about it in this post. So read this article till the end and share it with your friends too.

What is a QR code || Create and Scan QR Code

Users of QR code are increasing day by day. Now many people message their friends and relatives with this trick. People are also using it offline. Even use it in many shops. You must have seen in many products that QR code is also given in it. Through which many people scan this QR code and find out the price and company details.

What Is A QR Code

The full form of QR code is Quick Response Code, it was created in 1994 by Denso Wave of Totya Group. It was made long back but still not many people know about it.

When it was made long ago, at that time it was mainly made to track the part of vehicles, but now it is also used for many works. Let me tell you an example. You will not only have Aadhar card but also you can see that QR code has been given in one side. Sometimes scanning it and seeing it basic details are given in it.

QR code has only symbol, it can be read only after scanning it. If you still do not understand, then I give you an example of a QR code below. On scanning it, there will be a link to my blog.

Why is the QR Code so important?

Now you must have come to know what is QR code. Those who have already connected to the Internet, they probably already know about what this Qr code is. It may seem a bit strange in appearance, but small business owners and entrepreneurs must know about it.

Initially it was used in supermarket grocerries to track things. But today it is used by all big and small companies to increase their sales. Talking about a consumer like us, with the help of these QR Codes, we can very easily do some action using our SmartPhones.

Like Near Field Communication, it does not have any fancy electronics. Or else no special technology has been used in it. This is just a white and black grid that can be printed on any paper. And it is captured very easily in the phone’s camera.

The QR code is first captured with the help of Scanner App, then that App converts that QR code into any Valuable Information. For example, if you saw any QR code in an advertising board and you got it scanned. Then he will take you to some website.

What are the benefits of QR Code Business?

They are much more beneficial than any ordinary barcode. Its most important advantage is that we can store more information in it. We can scan QR code from any direction which is not possible in Barcode.

Its next advantage is that it is very interesting from Marketing Point of View. Due to which it engages the Costumers very easily. Due to which the company can have good marketing with very little investment.

You can download and use QR code very easily, which is absolutely free. Similarly, any customer can enter any business very easily with the help of his mobile only. There are many websites that give you the opportunity to generate QR Code for free. That’s why companies select their options according to their needs.

What can we do with QR code?

Now we will know what can we do with QR code? If I tell you, then only you can give information about something. We can massage someone, and we can do a lot with it. I am going to tell you about this in the details below.

Many people now use QR code for all this. Apart from these, it is also used in many things. If you use Whats app Web in PC, then you have to add contact by scanning the QR code. You can also use QR code to use Pay-TM.

You will see this in many products or in many places. Because its use is increasing day by day because we cannot read with it and we can massage or do any other work without any hesitation. So let me now tell you about how to generate the QR code below.

What can be stored in the QR code?

In this, we can enter any URL so that if someone scans it, then he can easily open your website. For example, if you want someone to follow your Instagram account. Then you can enter the URL of your Instagram in that QR code.

So that if someone wants to scan it, then it will be redirected to your account. In the same way, you can also put any video, image, URL link in the QR code.

The QR code was first invented in 1994 by Denso-Wave, a subsidiary of Toyota Group. It was originally designed to track various parts of that company. But over time its use also increased a lot, due to which it had to be commercialized.

How To Create a QR Code

It is very easy to make this code. There are also many Apps and Software to make this. But you can also make it online very easily. I am telling you some simple steps here. By following these you can generate your QR Code.

All the steps I have told you above were very simple steps. I hope you have understood and you must have created the QR code. Now we will know how to scan QR code? So it is also very easy to scan it?

How to Scan QR Code?

Just as creating a QR code is simple, it is much easier to scan it. So let us tell you how to scan it.

By following the steps mentioned above, you will be able to scan the QR code very easily.

Conclusion: I hope you have liked this “What is a QR code || Create and Scan QR Code” information and you must have understood it very well. If you face any problem then definitely tell us in comment and share this post with your friends. Also, if you have any question or suggestion related to the article, then also tell it. Thank you..!!
Source

How to check Aadhaar Authentication History

How to make your name Wallpaper in Mobile

How to Unlock the mobile lock in just 1 minute

How to recover deleted call history

How to Set Voice Lock in Mobile? Lock / Unlock Phone by Voice

How to make Ringtone of Your Name

ABOUT US
androidone.xyz is Technology Update website Which Provide How to, App Review, Gadget Review, Mobile Tricks And Tips
Contact us: [email protected]
FOLLOW US
© Copyright 2021 - Androidone.xyz
MORE STORIES
Applications

How to see deleted messages on Whats-App