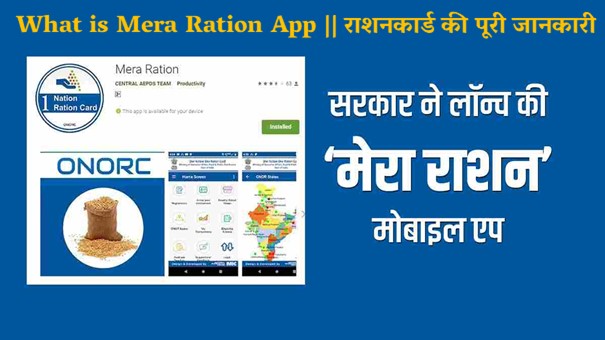 What is Mera Ration App?

It is a mobile application which is available in Android and iOS systems. Through this app you can check the complete data of your ration card. Through this, you can download your ration card online, change your dealer, check whether the name of the members of the household is linked with Aadhaar or not, you can check how much ration you get on a month-by-month basis. Huh. And you can also see how much amount received every month. Along with this, you can also see the location of the dealer near you.

This facility was started by the government from August 2019 under One Nation One Ration. Initially it was limited to only 4 states but later it reached every nook and corner of the country. Understanding the need of people going from one state to another in connection with work, this facility was started. With this, now anyone can take his ration entitlement in any state. Here 14 regional languages ​​are included.

You get so many better features in Mera Ration App that you can do all the work very easily with this app itself. Here you will get all the information related to your ration card. Let us know in detail about my ration embryo.

With this facility of registration you can register your ration card on this application. For this you need ration card number. If you live in another state and want to take ration in the current situation, then you can make changes from here.

Here you get the information of your ration card, such as how much ration is valid for you and whether it has been received? Apart from this, how much ration you have got and how much is left will also be shown. It shows you pulses, rice, cereals by each category.

Through this feature you can see all the ration shops near you where ration is received according to the location on your mobile screen. It can come in handy to get you ration in another state.

In this feature you can see that according to One Nation One Ration, in how many states of India you have this facility that you can get your state’s ration in any other state. You can see it through a point in the map of India.

Through this you can check whether your ration card comes under One Nation One Ration or not. worth it or not.

Under the new rules, the names of all the members in your ration card should be linked with the Aadhar card. You can see it through this feature. If it is not so then you can take appropriate action for it.

This feature will be very useful for any citizen. Through this, if you have any complaint or suggestion, then you can easily reach through this Mera Ration App.

Let us tell you that this feature is not for any common man. This ration is only for the concerned government officials.

After knowing all the features of Mera Ration App, you must have found this app very useful. Now just sitting at home, you will get all the information about the ration card on your mobile in a pinch, for which you will have to download the Mera Ration App. But wait do you know how to download Mera Ration App? Otherwise come and understand.

This task is very easy which can be done by following the following steps.

This app must be installed on your mobile. From here you will get many information easily. Still, there are some questions that will come in the mind of the ration card holder after using this app.

Some questions and answers related to Mera Ration App

Question: How to get my ration from any other state through Mera Ration App.

Answer: An option has been given for this in My Ration App. You can get your ration card migration done from this app itself, the process of which is as follows.

Question: What information do I get from Mera Ration App?

Answer: With the Mera Ration App you can know how much has been distributed on your Ration Card. How much did you get, how much is left, the names of your family members and whether each member is linked with Aadhaar or not. You can know the information of ration shop near you.

Question: In which state is my ration app valid and the facility is available?

Answer: My Ration App is applicable almost all over India under the scheme of One Nation One Ration, still you can check by giving your ration card number by clicking on the feature of ONOR State in this app.

Question: Can you make any kind of complaint or inquiry from this app?

Answer: Yes, if you have any complaint or query related to your ration card then you can do it through Mera Ration App. Understand step by step.

Conclusion: We have explained you complete information about What is Mera Ration App under One Nation One Ration Scheme through this article. You also know how to use My Ration App. We hope that you liked this article. Still, if you have any question related to this, then definitely write in the comment, we will definitely try to answer your question. Do share this post with your friends and family. Thank You..!!
Source

How to make your name Wallpaper in Mobile

What is Jio Switch App || How to use it Complete Information

How to read others WhatsApp message on your mobile

How to get weather information from mobile

How to View PGVCL Electricity Bill Online in Mobile

How to make Ringtone of Your Name

How to read others WhatsApp message on your mobile

What is Jio Switch App || How to use it Complete Information

ABOUT US
androidone.xyz is Technology Update website Which Provide How to, App Review, Gadget Review, Mobile Tricks And Tips
Contact us: info@androidone.xyz
FOLLOW US
© Copyright 2021 - Androidone.xyz
MORE STORIES
Applications

What is Jio Switch App || How to use it Complete...